Introduction
Weather-savvy mariners know the best resource for monitoring the location, size, intensity, and movement of thunderstorms is Doppler Weather Radar from the National Weather Service (NWS). In the first of a two-part series, I’ll explain the basics of radar and introduce the most common types of imagery.

The Network
The NWS’s Doppler Weather Radar network is comprised of 159 ground-based stations (figure 1). These stations are strategically placed to protect major population centers and to cover for adjoining stations during an outage or when maintenance is required. There are many websites and smartphone/tablet applications that provide access to radar imagery. Since the NWS operates the only national network, regardless of how you obtain radar imagery, you are viewing NWS data.

The Basics
Strong thunderstorms may reach a height of 50,000 feet. To assess their overall structure, the radar station employs several scanning strategies, called Volume Coverage Patterns (VCP), to collect data from the surface to the upper reaches of the atmosphere. The antennae makes an initial, or base, scan by making one complete revolution at an elevation of 0.5° above the Earth’s surface. When this base scan is complete, the antennae completes additional scans, repeatedly increasing the antennae’s elevation by about one degree until the highest elevation of the VCP is reached. The highest elevation scanned by NWS radar is 19.5°. The collection of individual scans within a VCP is known as a volume scan (figure 2).

As the station’s antennae spins, it emits short bursts of energy pulses (at a wavelength of 10.7 cm) that travel radially (like spokes on a wheel) away from the station at nearly the speed of light (figure 2). If these pulses encounter a target, such as a raindrop, hailstone, bird, insect, or other object, a portion of the energy is backscattered (reflected back) toward the station along the same radial travelled on the outbound journey (figure 3). Although pulses are sent nearly 1,300 times a second, the station spends the majority of the time listening and extracting data from backscattered energy pulses. 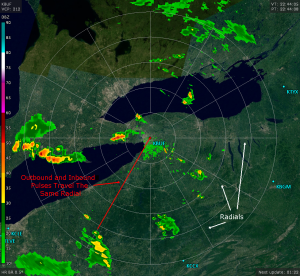 Figure 3: Base reflectivity image from KBUF (Buffalo, New York) with range rings and radials. (Click image for a larger version.)

A wealth of useful information is derived from the backscattered pulses, such as the target’s direction and distance from the station, its height above the ground, its shape, and other physical characteristics. (Upgrades over the past few years have improved the system’s ability to discern between dust, insects, raindrops, etc.) While the wavelength of the backscattered pulse doesn’t change as it travels through the atmosphere, its frequency shifts based on its motion relative to the radar station. By detecting this change in frequency – the Doppler Shift — the station can determine if the object is moving toward or away from the station, and the speed at which it is moving.

Let’s take a look at the two most common types of radar imagery.

Doppler Weather Radar Imagery – Reflectivity
Reflectivity, measured in dBZ, is the amount of energy that is backscattered by targets and is related to the precipitation rate (how hard it’s raining) of the storm. Reflectivity imagery is used to assess the location, areal coverage, intensity, general motion, and evolution of weather features such as discrete thunderstorms, thunderstorm clusters, squall lines, tornados, waterspouts, and hurricanes.

Values of dBZ vary dramatically based on the size, number, shape, and state (liquid or frozen) of targets. Less than 20 dBZ indicates mist, dust, and other small particles. Extremely small particles, such as cloud droplets, are too small to be detected, therefore clouds lacking raindrops or hail do not appear on NWS radar images. Reflectivity values associated with rainfall range from 20 dBZ to 50 dBZ, depending on the number and size of the raindrops. Hail is typically present when dBZ values are greater than 50. 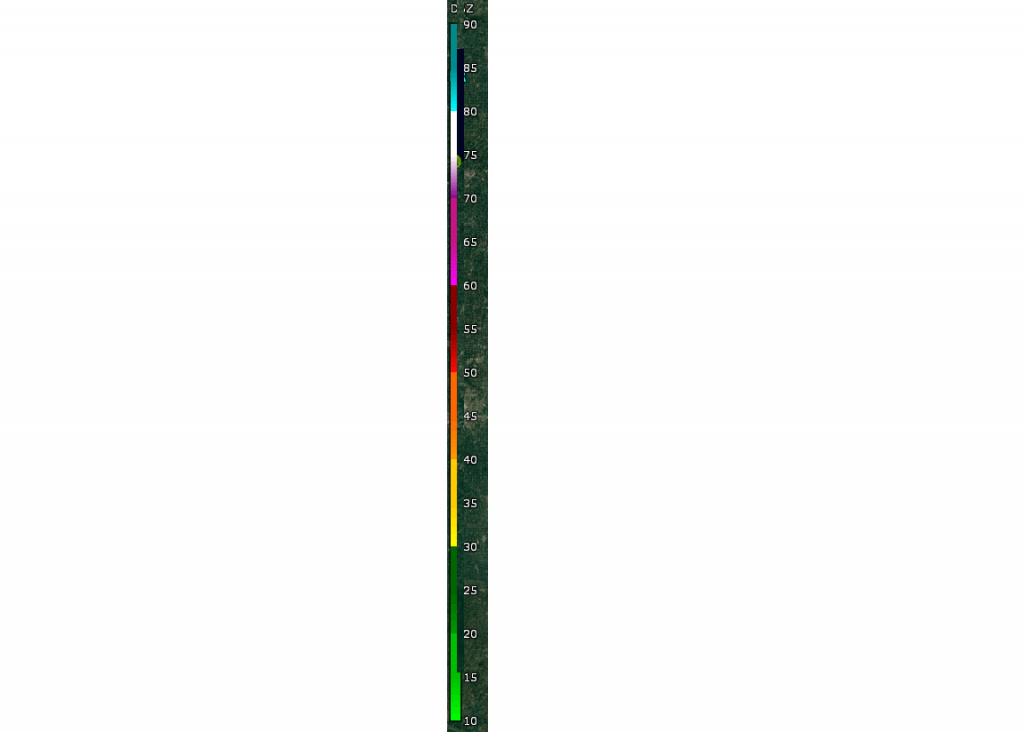 Color schemes vary based on the provider of radar imagery, but higher dBZ values are typically represented with brighter colors (figure 4). On the sample reflectivity image (figure 5), light rainfall (< 30 dBZ) is represented by shades of green. Shades of yellows and golds indcate areas of moderate rainfall (30 to 40 dBZ). The most intense rainfall associated with the strongest thunderstorms appear as shades of orange, red, and purple (dBZ > 40). The dark red areas southwest of station KMOB (in the center of the image) suggest the presence of hail.

There are two versions of reflectivity imagery – base and composite. As mentioned above, to collect data from a deep layer of the atmosphere, the station must conduct several scans by starting slightly above the surface and progressively increasing the angle of the antenna. A base reflectivity image displays only the data collected from the initial, or base, scan. As the name suggests, composite reflectivity merges data from all elevations from a single volume scan into one image. Since more data (multiple layers) is included in the image, composite reflectivity allows for a more complete analysis of a storm system’s strength, structure and transition over time.

A comparison of the base (figure 6) and composite reflectivity (figure 7) images from KLOT (Chicago) on June 21, 2011 shows the dramatic difference between viewing only a fraction versus all the data collected by the station during a specific set of scans. Most obvious is the overall size of the storm system is much larger on the composite image. In addition, the areas of the system corresponding to high values of dBZ cover a much larger area. Due to the height at which hail typically occurs, hail (associated with dBZ > 50) is more likely to appear on images of composite reflectivity.

Figures 6 and 7: A comparison of the base (left) and composite reflectivity (right) images from station KLOT (Chicago, Illinois) on June 21, 2011.

Doppler Weather Radar Imagery-Velocity
Ever been in the path of an approaching thunderstorms and wondered how much time you had to prepare for their arrival? While a loop of reflectivity images is an effective method for determining the direction a thunderstorm is moving, it doesn’t directly provide an estimate of the storm’s speed or the overall wind field. Velocity imagery easily provides this important information. Using the Doppler shift, velocity imagery displays the motion of targets, such as raindrops, associated with the thunderstorm. The movement of these targets can be used to infer the speed and direction thunderstorms are moving, as well as, the overall wind field relative to the station. 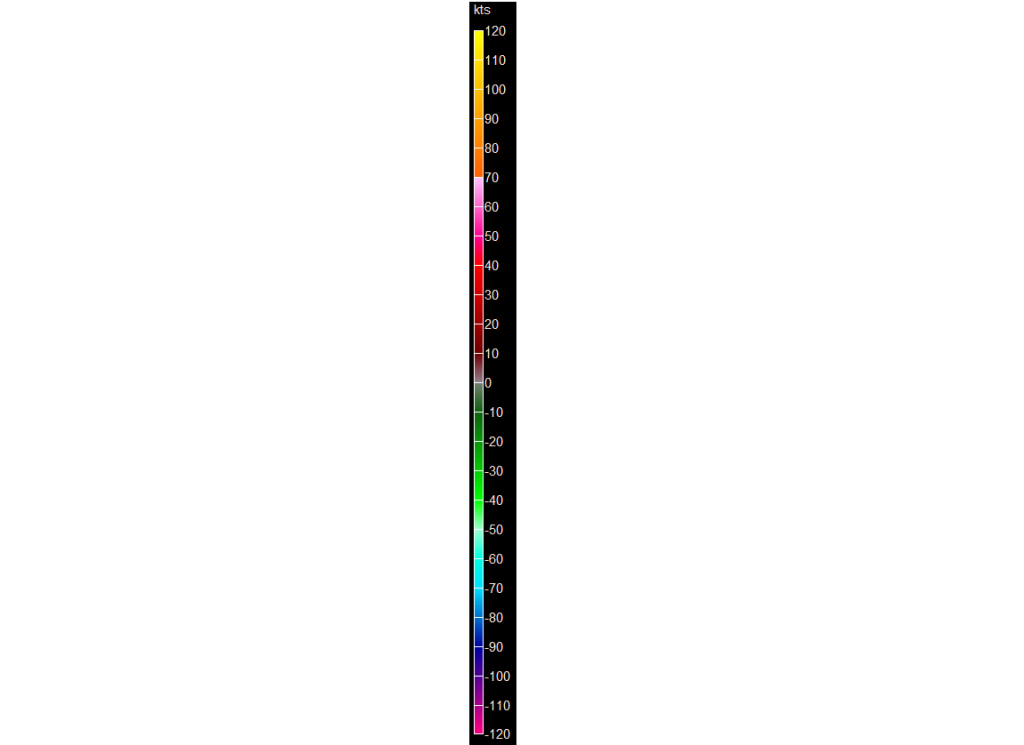 The velocity scale is in knots (figure 8), with negative values representing wind blowing toward the station (inbound) and positive values showing wind blowing away from the station (outbound). Data is always displayed relative to the station, therefore the first step in using velocity imagery is locating the station, which is typically labeled with a four-letter abbreviation. It is also helpful to visualize the station at the center of a bicycle wheel with the spokes representing the radials (figure 3). Radar pulses travel along the same radial on their outbound and return journey (figure 3), therefore all motion shown on velocity imagery is observed along the same radial.

Figures 9 & 10: Base reflectivity (left) and base velocity (right) from station KMQT (Marquette, Michigan) on June 11, 2017. (Click image for a larger version.)

On June 11, 2017, the base reflectivity (figure 9) and base velocity image (figure 10) show a pair of thunderstorm clusters near station KMQT (Marquette, Michigan). The green shading west of KMQT on the velocity image (figure 10) represents inbound velocity while the red shading to the east indicates outbound velocity. From this data, we can determine the overall wind field was westerly and that both clusters were moving towards the east.

Downbursts
Doppler velocity imagery can also be used to analyze the strength of downburst winds from a thunderstorm. On April 25, 2015 a cluster of thunderstorms roared across Mobile Bay, Alabama during the annual Dauphin Island Race. A little after 3:00 pm, sailors on many of the 125 boats were struggling against hurricane-force winds and accompanying steep waves produced by the severe thunderstorms racing as they raced across the Bay. Eight boats sank during the storm, forty people required rescue from the water, and tragically, six lives were lost. The 70 knot winds associated with the downbursts are clearly visible on the velocity image (figure 11) from station KMOB (Mobile, Alabama). The station is located in the upper-left corner of each panel.

A detailed analysis of the Dauphin Island Regatta storms, including a look at the dynamics of thunderstorm downbursts can be found here.

A Few Caveats
Velocity radar is a useful resource, but there are a few details that must be kept in mind. Due primarily to the curvature of the Earth, the altitude of a radar beam steadily increases as distance from the station increases (more on the behavior of radar beams in part 2). Due to this behavior, the radar beam may be sampling well above of the surface and the wind speed shown on a velocity image may not represent the surface wind speed.

Looking Ahead
In part two, I’ll discuss the behavior of radar beams, radar anomalies, and offer a few guidelines for using radar imagery.

Creating a Bayview or Chicago Mac weather forecast and deciding on a race strategy can be challenging. A custom forecast from LakeErieWX can relieve much of the burden and allow you to focus on other last-minute details. Custom forecasts are delivered via email in PDF format and include a detailed discussion of the expected weather conditions. Click here for additional information and a sample forecast.

Boating requires many skills, but none is more important or challenging than understanding and predicting marine weather patterns. Whether you are a sailor or power boater, a marine weather seminar can make your journeys safer and more enjoyable by improving your ability to anticipate and avoid hazardous weather conditions. Click here for more information regarding my seminars and the current schedule. 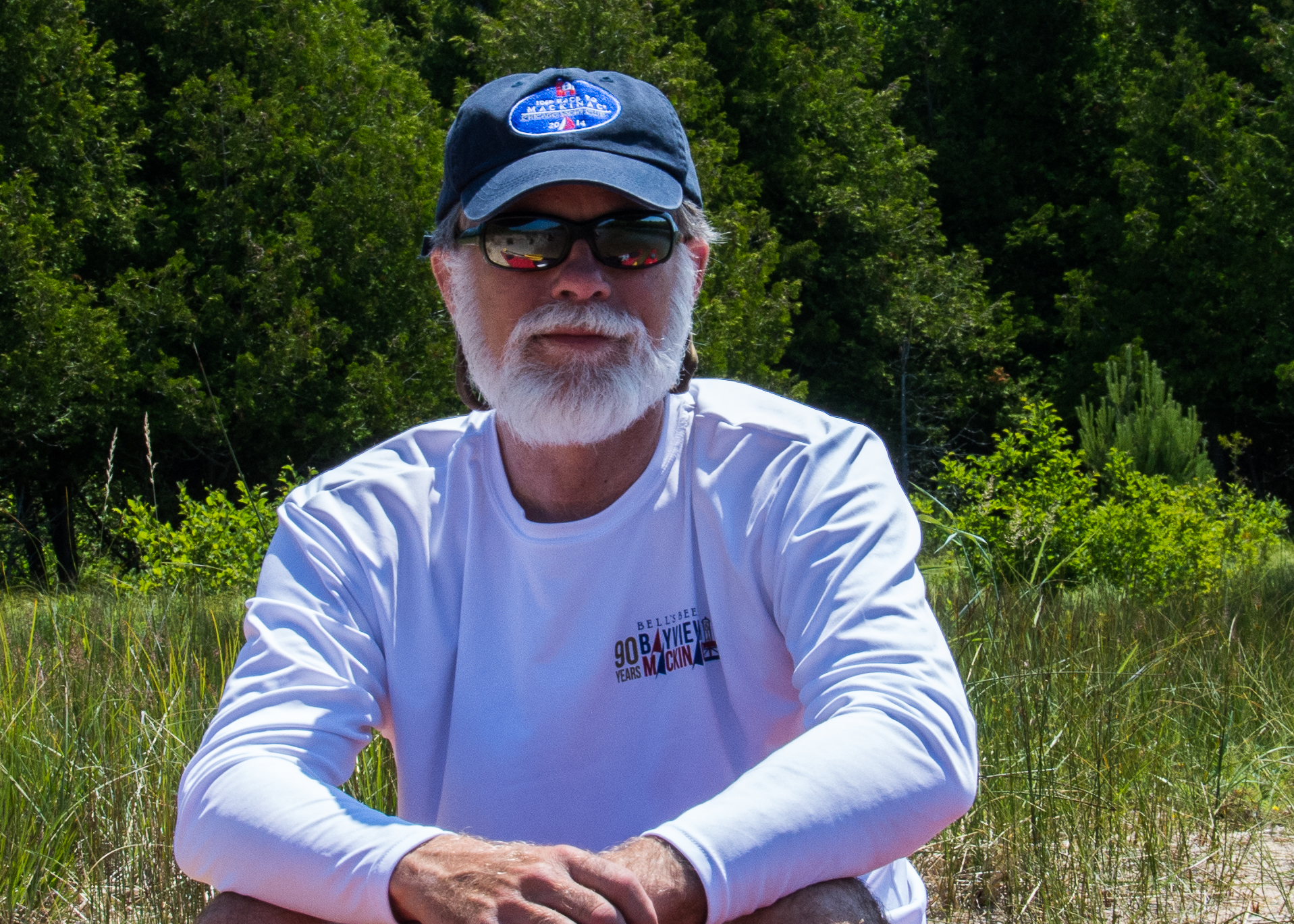 Marine Weather Newsletter
Are you interested in reading and learning more about marine weather? Several times a year, I publish an article on an interesting marine weather event. Click here to subscribe to my ‘no spam’ email distribution list. – Mark Thornton

Mark Thornton has sailed the Great Lakes for more than 30 years and currently owns Osprey, a C&C 35. His interest in weather forecasting grew from his experiences cruising and racing on the lakes. Mark is a 2006 graduate of the Penn State University Certificate of Achievement in Weather Forecasting, a two-year program that develops skills in general, tropical, and severe weather forecasting. He has served as the race meteorologist for the Bayview Mackinac Race since 2014.
Marine Weather Seminars

I regularly publish articles on interesting marine weather events or marine forecasting in general. Click here to add your name to my email list.